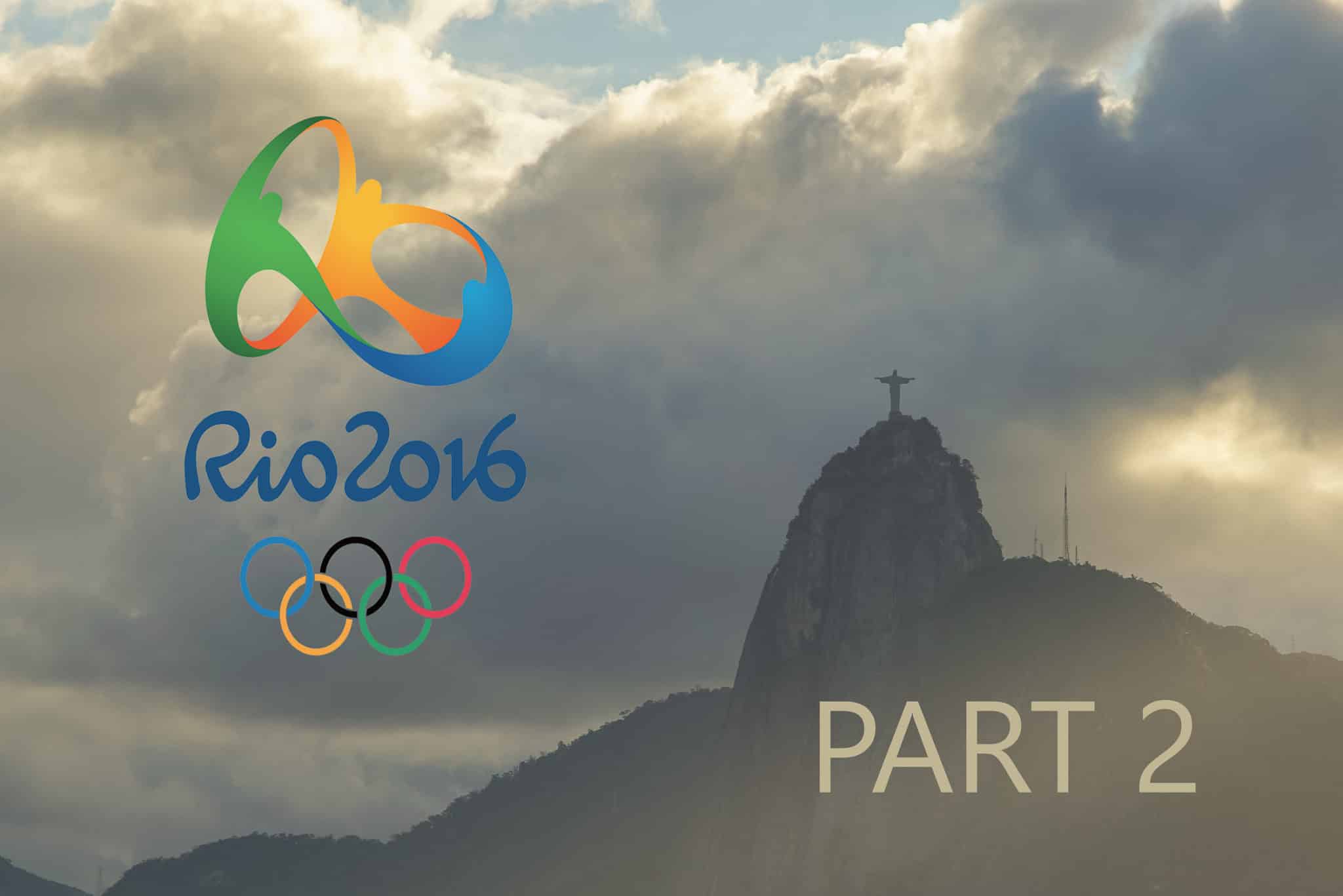 Our day ended well after midnight but that didn’t stop us from getting up at 5:30 a.m. to head to Copacabana Beach to see The Today Show! Any of you that know me, know that my morning starts off most days with a cup of coffee and The Today Show. Tim makes fun of me because I am constantly saying something like, “I heard on the Today Show this morning…” or “This morning on the Today Show I saw…” My mother can be heard uttering these words as well if you listen closely. At any rate, the weather cleared up, the sun was out, we were decked out in red, white, and blue (Thank you Von Maur for your abundance of clearance-priced USA items from the 4th of July, including these stylish swim coverups!) and we made our way to Copacabana. Because Rio is an hour ahead of us back in Atlanta, we had a little extra time to get there before the show started which was nice. We got a great spot right in the middle and started waving our flags. I knew the Band Perry was going to be in Rio but we just got lucky that they were there the day that we showed up. That was a nice surprise. Everyone was so great on set…very friendly, taking selfies, working the crowd. Our little section of the crowd, by total coincidence, was all from north Atlanta (Cumming, Alpharetta, and Roswell…small world!) Hoda by far was just THE BEST! So friendly and genuine. Her enthusiasm just lit up everyone around her. She was so willing to take selfies with everyone that they literally had to call her back to set because they were on in 10 seconds. But quite honestly, everyone was like that. It was just a laid back, friendly atmosphere. The good time could be felt by all. It was a blast to be “USA” outside of the US because it brought people (who probably would have ignored each other back home) together as a team. It was even better when you were decked out in USA colors. People from other countries wanted to take pictures and Americans shouted “USA” when you walked by. It was just great fun. There is really no other way to describe it.

The Today Show in Rio

Thanks to everyone who took the time to take pictures of their TV sets and post them on Facebook or text them to us. We really enjoyed hearing from everyone and the pictures just make me laugh. We look like we were pasted in there. 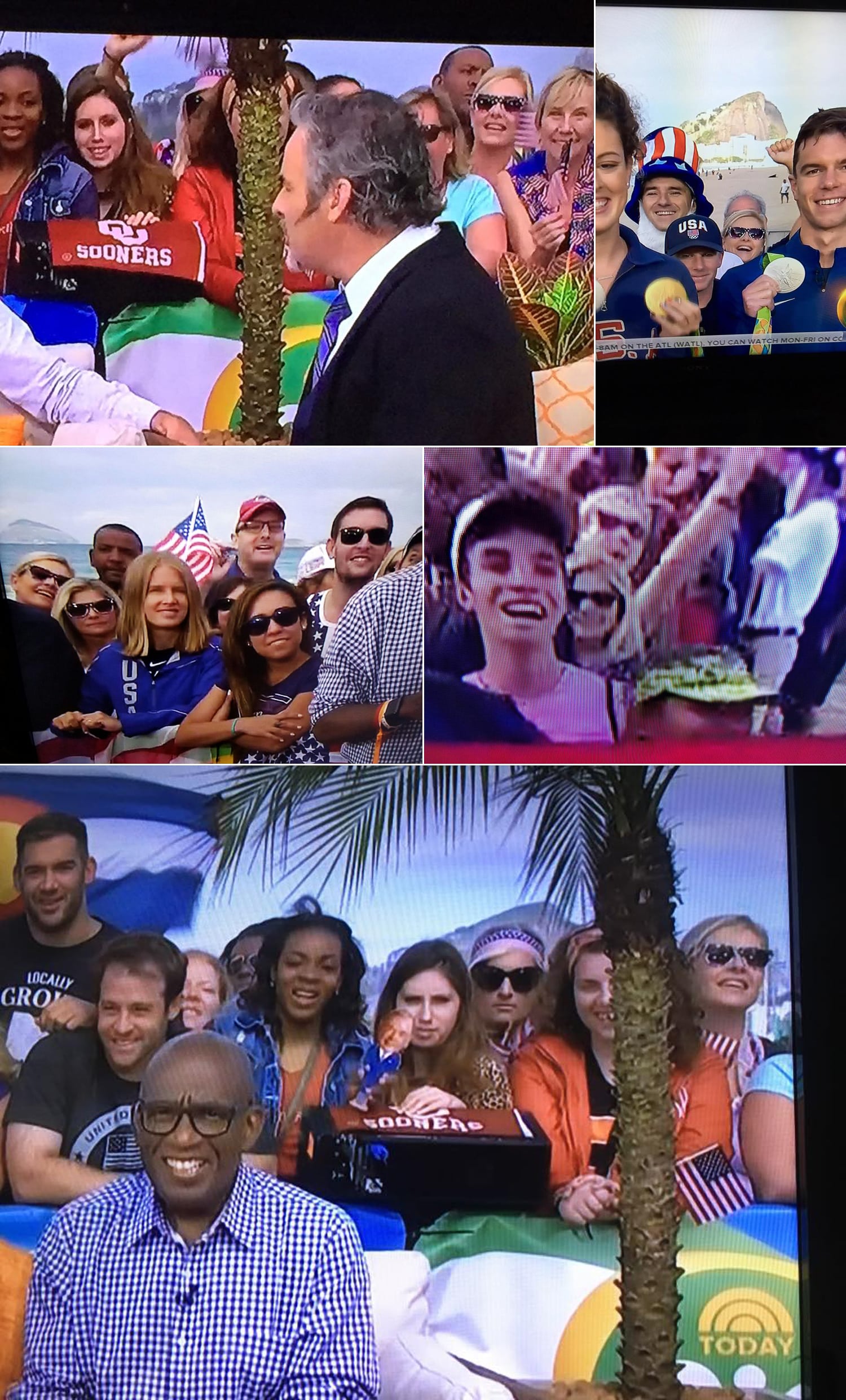 Our 15 minutes of fame in Rio

We finally pulled ourselves away from the Today Show to walk down the beach to beach volleyball where the Brazil women were going to be playing. Unfortunately, they won so quickly that we missed the match. Fortunately for us, the tickets included 3 matches (and probably as many as you could watch until someone kicked you out of your seat, but we didn’t try that.) We had the world’s best seats and I have no idea how we got them. They became available very late and George sent us a note to let us know that beach volleyball was available. We paid $25 for front row seats. We were with a flight crew of an NBC executive and they said the block of seats were NBC’s (and mostly empty!) But that’s just kind of how our day was going! It was very sunny and hot, unlike the day before which was gray, cold, windy, and gloomy. Could not have been more opposite! We loved beach volleyball for more than the obvious reasons 🙂 The fans were amazing. Chile was singing their country song, we had Canadian super fans running around in morph suits, there was a DJ and dancers, it was so cool. When I got home, I watched it on TV to see if you could tell what was going on in the stands. You kind of could…but I think I noticed it more because I was there. TV just doesn’t capture the energy in the same way. 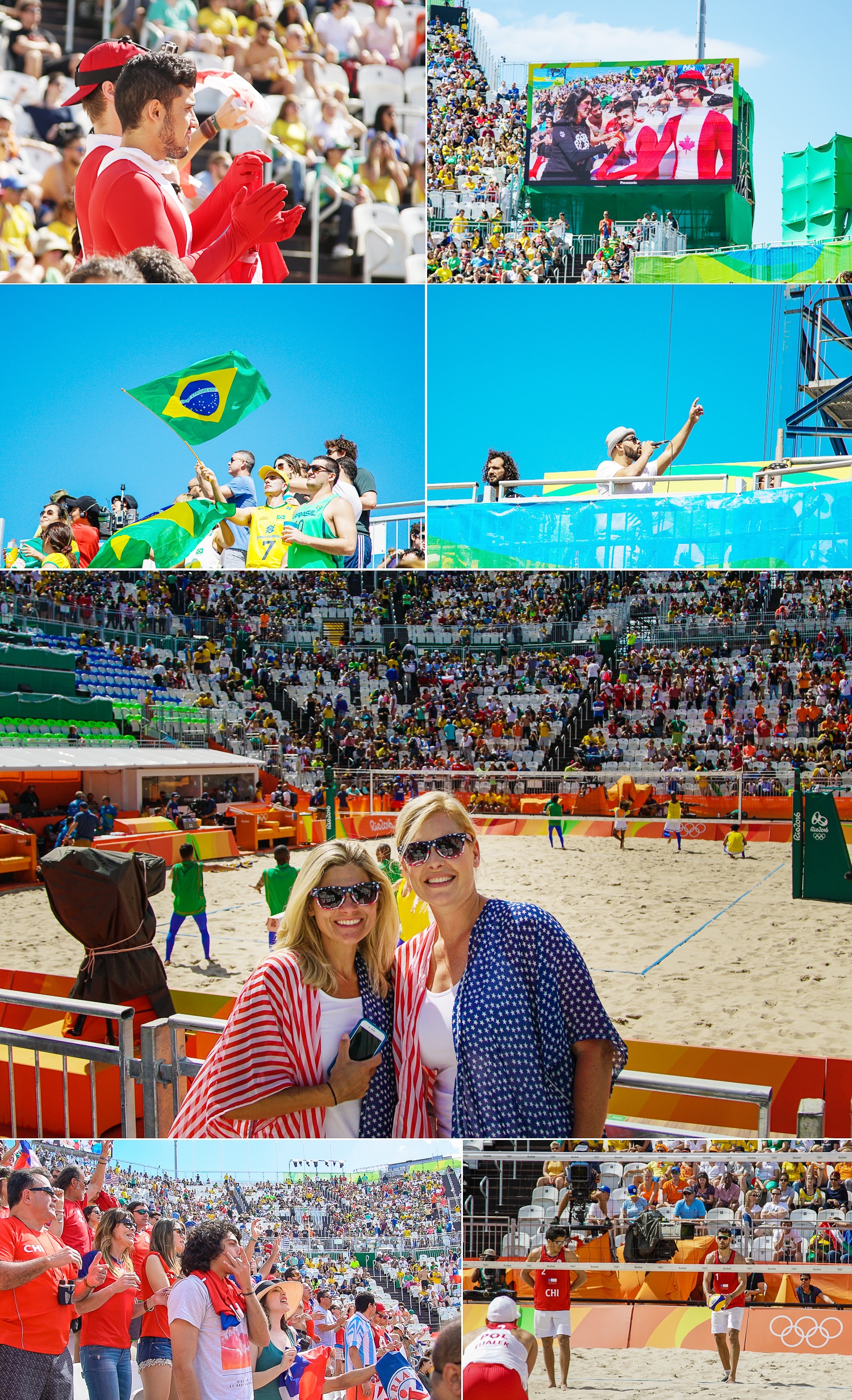 We grabbed some lunch along the beach in an outdoor café and then decided to walk down to the base of Sugarloaf mountain where there is a wall along the water. We walked out on that wall and once again, the views did not disappoint. Looking at the panoramic picture, the Today show was on the middle right where it is fenced off. You can see the waves were very big and the water was rough. I think it was red flags that day so no one was in the water.

View of Copacabana Beach from the base of Sugarloaf Mountain.

The Beach Volleyball venue as seen from down the beach. The sidewalks all had a unique design. This was throughout the city.

We asked George where the best place was to see the sunset and he told us to go to Sugarloaf Mountain. Boy am I glad we did! We headed over there around three o’clock (since it was actually winter in Brazil, sunset was at 5:30 p.m.) There were 2 cable cars. The first one took you to the smaller mountain, but don’t underestimate the views from that first mountain. On Facebook, I titled it “things that make you say WOW!” What an incredible view of the Bay. We were still getting our bearings, so at that point, we weren’t quite sure what we were looking at but it was incredible. The second cable car took you to the tall, pointy mountain you probably saw on TV. It is pretty iconic in Rio. Michelle bailed on me just as we were going through the turnstyle and then when I got to the top of the mountain, my 3rd battery on my big girl camera died. Yes, I had 3 batteries and the 3rd one decided to die the moment I got to the very top of the mountain just as the sun was setting behind the mountains. Fortunately for me, the iPhone still had some charge left and some space for pictures. As you can see it was 3-deep to capture the sunset from up there. I can see why. The views were absolutely breathtaking. I wish I could have taken more sunset and more nighttime photos from up there. I guess that will be a redo if I get to go back.

The views as the sunset over Rio from Sugarloaf Mountain. Michelle got a picture of my cable car heading to the tall mountain. In the night photos, you can see Christ the Redeemer shining high above the city.

We made it back to George and Paty’s condo and were greeted by these two cuties. We actually hadn’t seen them for almost 2 straight days. They were wondering where the gringas were that took over their bedroom and then disappeared! 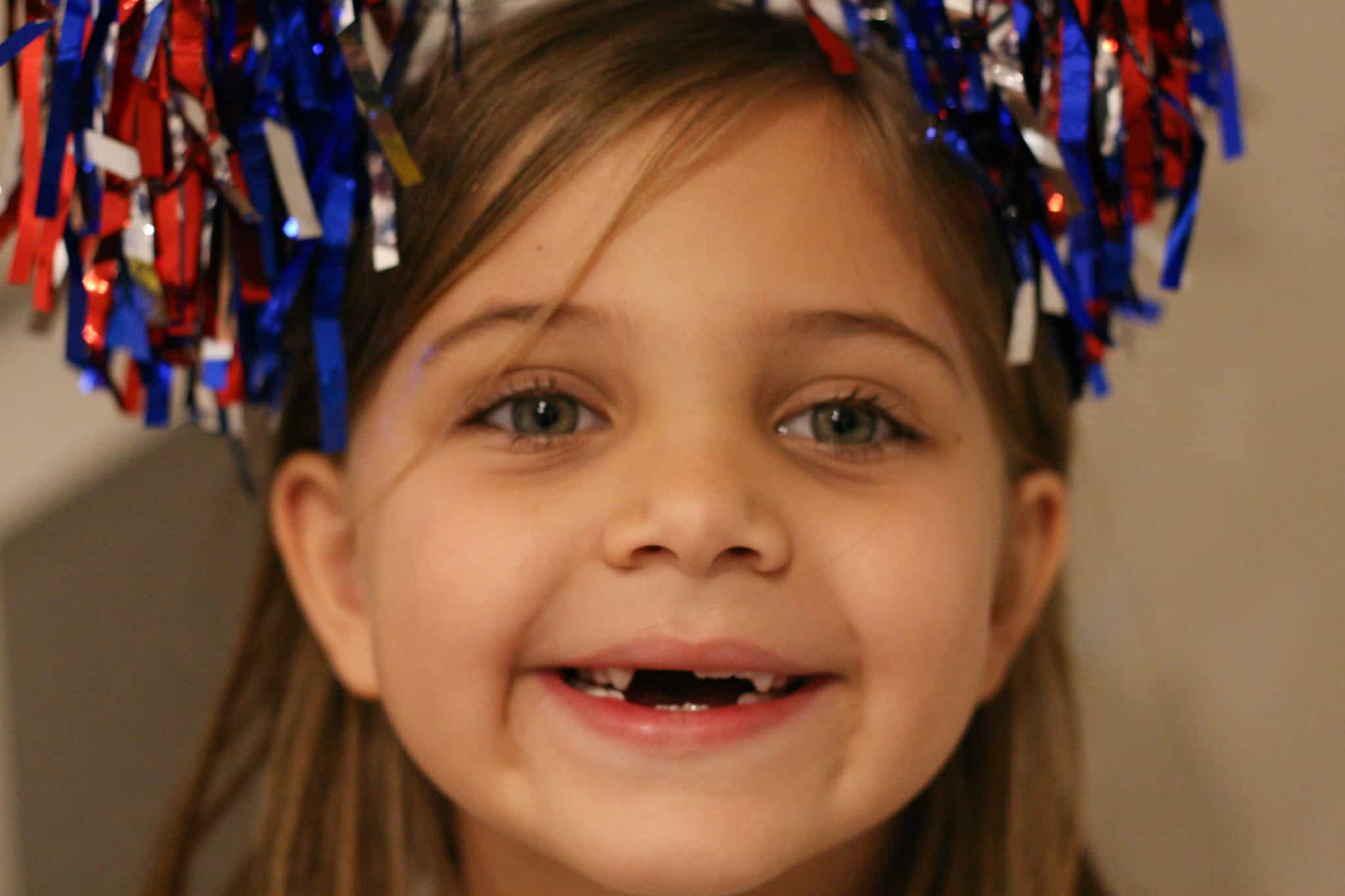 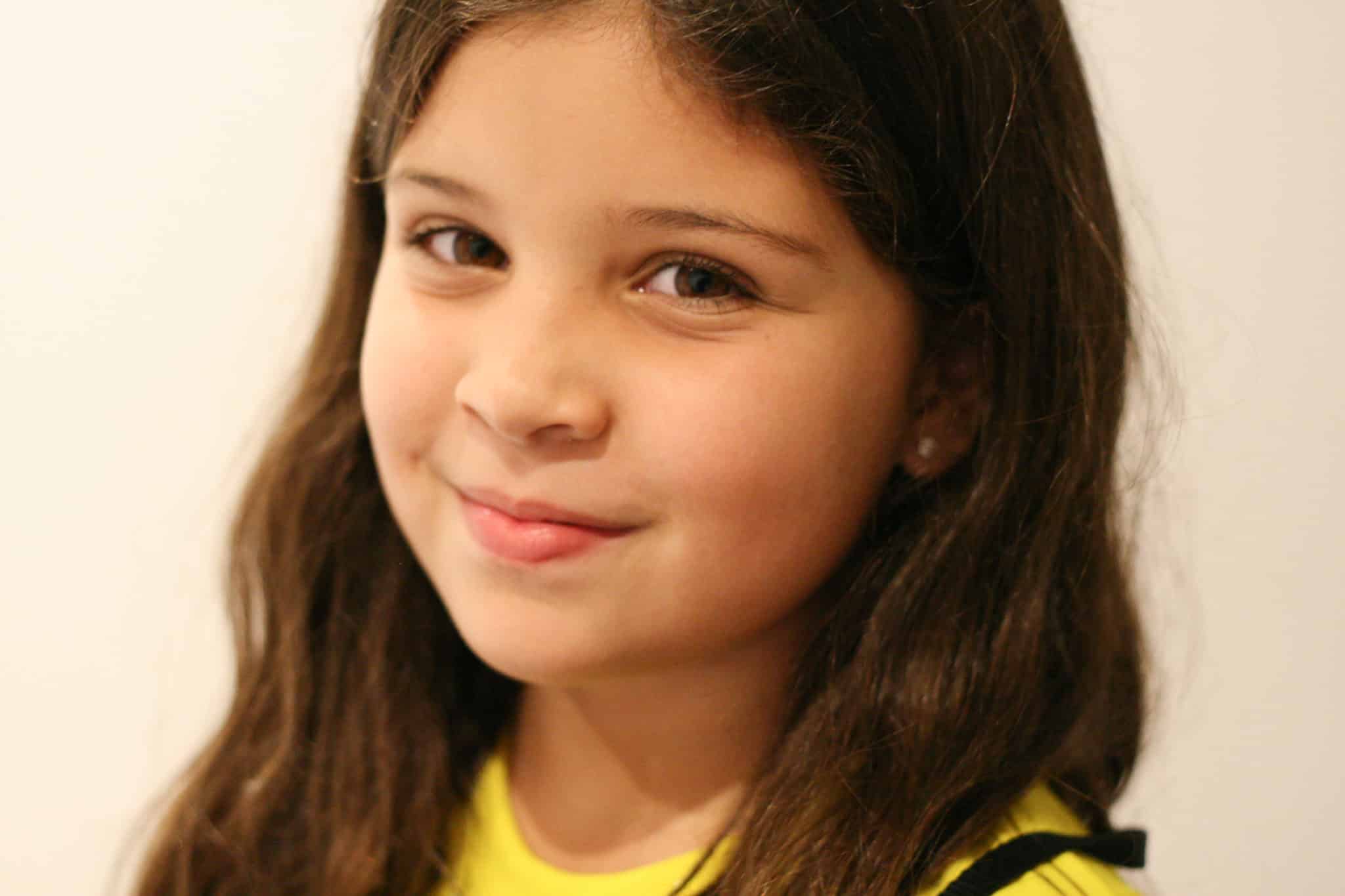 If you’ve made it this far…looks like there is going to be a Part 3 because I still have a lot of pictures to share…stay tuned!

Get your FREE Shoot Planner

Define your brand, plan your shoot, create a checklist.

Not sure where to start?
DOWNLOAD YOUR FREE PERSONAL BRAND PLANNER TO GET THE JUICES FLOWING

Hi! It's been a while since I introduced myself so

Ebon liked his wife's photos so much that he came

In honor of World Cocktail Day, I bring you the Ar

These days everyone needs a good professional head

More from my shoot with Dr. Ola at the beautiful H

Detail and action shots are important additions to

🖌Shoutout to Blake and Sabrina!! They just laun